After all the hype Harley Davidson has allowed to build around the CVO Pro Street Breakout, I was pleased as punch to find out that it had finally arrived on our shores and apparently there is already 1 on the road.

What exactly defines Harley Davidson’s CVO or Custom Vehicle Operations? Harley Davidson gives its CVO models extra attention to detail. You will find custom paintwork, hand painted pinstripes, tons of chrome and farkle galore with almost every possible upgrade all in one bike. So you get a sense that Harley Davidson pours all its pride into these machines. While some of the popular features get trickled down to production models eventually, it usually takes years and then sometimes they are limited to CVO models only. On top of that, to buy spare parts for any CVO, buyers must provide proof of CVO ownership, so it is a very exclusive club to buy into.

In the CVO Pro Street Breakout, Harley Davidson designed the machine with Pro Street drag racing in mind, to carry the styling cues and attitude of these racers. They went as far as creating a new shades of chrome, “Smoked Satin Chrome” and “Scorched Chrome” for places where you would usually expect to see regular show chrome all the way to the rims, which are already balanced at the assembly factory.

In all, that’s 3 different shades and 2 different finishes on the engine alone. Smoked Satin Chrome, Scorched Chrome and Wrinkle Black.

But Harley Davidson went even further, apart what it calls a new styling direction, they made handling improvements over the regular Breakout, the base model that they used for this CVO edition. Just to get a sense of the character of this machine, I tested 2 models, the Softail Breakout and the Fatboy S, since pricing aside, a limited production run means dealers will not provide test rides on any CVO edition models. Not that there’s really room to doubt how good they are anyway. 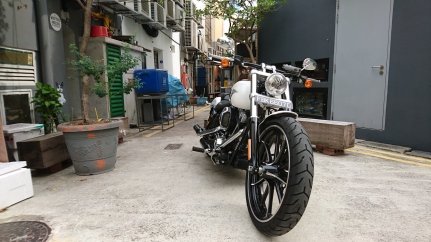 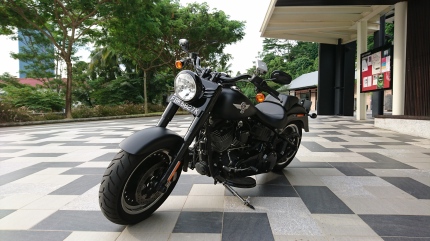